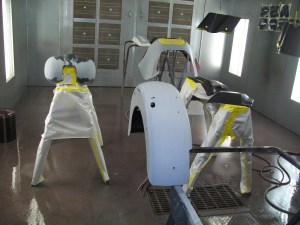 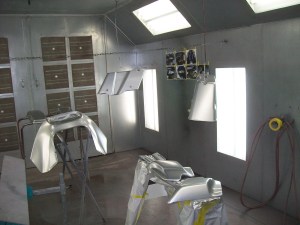 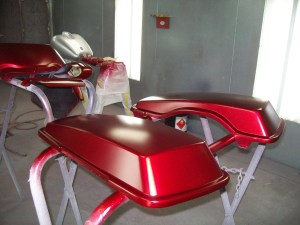 This 2003 100th Anniversary Special Edition Harley-Davidson Road Glide is in the shop for a make over. The owner wanted something special for this bike, but he didn’t want to paint over the original bodywork, so he spent years collecting body parts from other, I assume damaged, bikes of the same year and model. When complete he will remove and carefully store the original bodywork and replace it with this second set of bodywork.

To acheive the look the owner wanted is going to require an extended stay in the paint booth because of the number of steps required.

The bodywork was delivered to me with some of the bodywork already in primer, as seen in the first photo.

The first step was to paint everything silver. This provides a back color to the red that follows and will make the red jump off the bike.