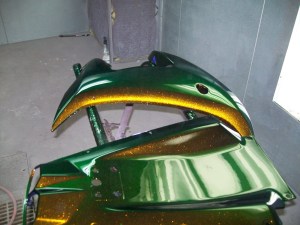 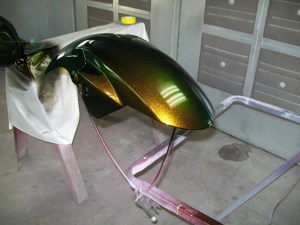 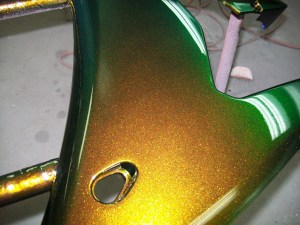 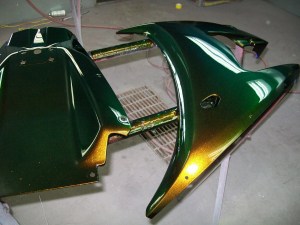 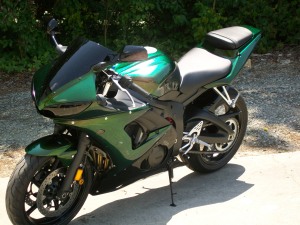 Jordan, an employee here at JMC AutoworX, was ready for a change, so he sold his car and bought a motorcycle.

Not satisfied with the paint that was on the bike, we changed it from its factory blue to this color shifting paint.

Depending on the light the paint can be green, gold, or if you catch the light just so, purple.

I think this paint would be a little much on, say, a full size Ford panel van … but on this bike it looks good.

Stop by the JMC AutoworX tent at Holly Hill Mall in Burlington Saturday, May 21, during the Mustangs of Burlington car show. You will have a chance to see a lot of great looking old cars … and if you like Mustangs, this is the place to be.

The award winning JMC AutoworX Karmann Ghia will be there, along with a couple of other cars painted in the JMC AutoworX shop … Rufus’ 1968 Chevrolet Camaro SS and Terry’s 1962 Austin-Healey Sprite.

I hope to see you there.

A Hurricane hits the shop 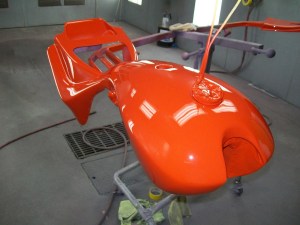 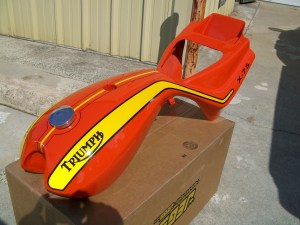 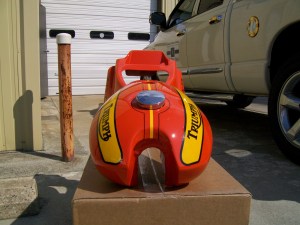 Now everyone rides Hondas, Yamahas, Suzukis or Harleys … but at one time Triumphs were the motorcycle to beat.

I am proud to play a small part in bringing this magnificent 1972 Triumph X-75 Hurricane back to the condition it deserves. Just like old cars, old motorcycles have a certain presence that new motorcycles just can’t match.

The stripes you see are a original factory Triumph stickers from 1972 or 1973, provided by the owner of the bike. I’m glad I didn’t have to put them on as they were so old and stiff I would have never gotten them on properly. When unrolled, as soon as you turned loose of them, the stripes and pin striping would immediately roll back up into a roll.

I spoke with the guy who put the stripes on … and I gather he nearly blistered my new paint with his language as he struggled with the stripes. In order to get the stripes to stick he had to heat them to partially melt glue. I have put on a lot of tape stripes in my time, but a guy has to know his limits, and this is one job that I am glad I contracted out.

If you are interested, you can learn more about the Triumph Hurricane here.