← Return of the Hurricane
Inside job → 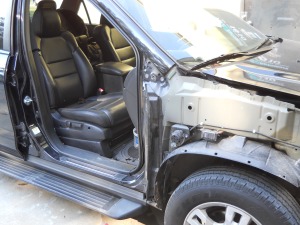 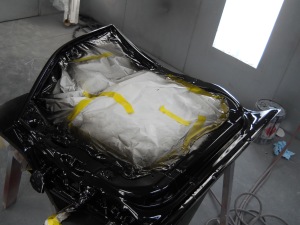 Just a second of inattention is all it takes and the next thing you know your car is bent. That is what happened to this Acrua MDX. The driver started backing out of the garage with the door still open and … well you can see the result.

The first couple of pictures show the results of the MDX’s door impacting the garage door frame. It wrenched the door open beyond its design limit, bending the door at the hinges.

The front fender was also damaged, tweaked when the door was forced open, so that it no longer aligned properly. It’s a shame too because at first glance it appeared the fender survived unscathed. After test fitting the new door, however, it was obvious that something wasn’t right because the body gaps were all wrong.

The last three pictures show the replacement door being painted. After the paint dries the door will be ready to reattach to the car to make it whole again.

Everyone has moments while behind the wheel when their attention is diverted and not focused on the task at hand. But that doesn’t make it any easier to swallow when just that moment of inattention leaves you with a repair bill.

← Return of the Hurricane
Inside job →