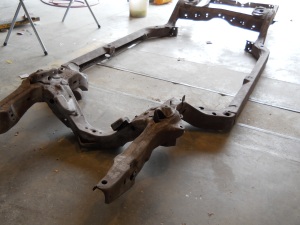 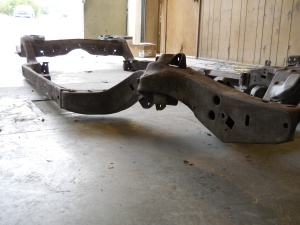 This frame, from a 1965 Chevelle, arrived at the shop yesterday. While we assemble a lot of cars here at JMC AutoworX, sometimes we are just the paint contractor, which is the case for this car. The actual disassembly and reassembly of the car is taking place at another facility.

The frame has already been media-blasted to remove all the rust and crud, but it needs a little touch-up before we apply the paint. While the metal has only a light surface rusting, easily removed, sanding this frame should be … errr … interesting … because of all the little nooks and cranny’s.

After the frame is painted, it will leave and the body of the car will arrive to receive its coat of paint. Reason for splitting the job like this is two fold. First I just don’t have the room to store both the body and the frame when they are separated like this, since this one car would take up the room of two. And secondly, and more importantly, the body is still being repaired and isn’t yet ready for paint.

There is something inherently satisfying in building a car, to watch it leave the shop and know you are the one that brought it to life.  But it is kind of nice sometimes to just paint ’em and send ’em home. Let someone else worry about what went where and lining up all the bolt holes, ya know?

What a great day!

The Downtown Festival in Reidsville, North Carolina, was a lot of fun this weekend. There were a lot of gorgeous cars there to ogle and the weather! You couldn’t have asked for a nicer fall day. The temperatures were just perfect under clear, Carolina blue skies.

There was another full turnout this year, but unlike last year, there weren’t many Volkswagens in attendance. So far as I know there were only two there, the JMC AutoworX Karmann Ghia and a Beetle painted up to look like Herbie. So by default the two V-dubs took first and second place with the JMC AutoworX car taking first place by a nose. The lovely model in this picture is my daughter, Mckenzie, the M in JMC AutoworX.

Don Case, whose 1966 Chevelle was painted in the JMC AutoworX shop, was also entered to compete. Unlike the Volkswagen class, the Chevelle class is a tough class to be competing in and Don, unfortunately, didn’t win anything. Which I think is a shame because his is such a rare car and the interior is original. I don’t mean restored to original, I mean original original. And the inside isn’t thrashed either. Yes it shows a little wear, but no more than you would see in a car that is only five to ten years old. Think about it, how often do you see a 45 year old car with its original interior in it, especially one that looks that good?

I want to give a special special shout out to Fred Curl. Unlike last year, where there were four cars from JMC AutoworX in the show, all parked together so I had plenty of people to talk to, this year I somehow missed Don and we ended up parking far from each other. But Fred and his nice 1956 Chevy was parked next to me and he was kind enough to sit with me all day to keep me company. You know, so I wouldn’t feel I had to eat worms.

You want to party?

Looking for something to do with whole family this Saturday that is fun for everyone? Join JMC AutoworX at the 20th annual Downtown Reidsville Festive in Reidsville, North Carolina. The JMC AutoworX Karmann Ghia will be there, along with Don Case’s black 1966 Chevelle SS, competing in the EZ Street Cruisers car show. For the non-petrol head members of the family, there is food, music and crafts galore.

Hope to see you there! 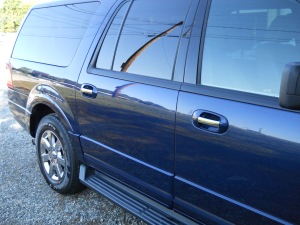 These two Fords, the most recent visitors to the  JMC AutoworX shop, are ready to go home. Both the Mustang and the Expedition were the victims of separate minor fender benders.

Looking at them now, however, you can’t tell where the mishaps occurred. Which is as it should be.

Time, and paint, heals all wounds 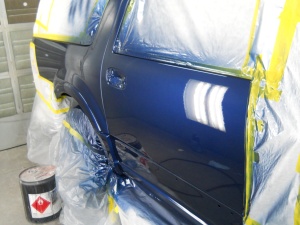 Yesterday, after pounding out the dent, a little filler, some sanding, and a spritz of primer, this Expodition was ready for paint … paint it received today.

Here is the car fresh from being cleared. In a few hours the clear coat will be dry and then we will strip away the protective masking, pop on the trim piece, also painted today, and this car will be ready to go back to its owner. 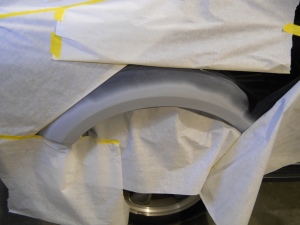 I know it has to be frustrating for my customers that everyone on the road thinks a parking lot is a good place for game of bumper cars. Take this Mustang for instance. It was sitting in its parking space minding its own business when Wham!

Small consolation to the owner that the damage is light, with only a bent wheel and rub marks on the fender well and rear bumper.  The first two photo’s show the damage and you can see the bent wheel at the 10 o’clock position of the second photo.

The last two pictures show the fender well taped off and primed, ready for paint. The bumper has been removed from the car and is being repaired in a separate step.

There has been a rash of these parking lot fender benders in the shop of late. And while I love the work, let’s all agree to leave the game of bumper cars at the fair, okay?

Oooh, that had to smart 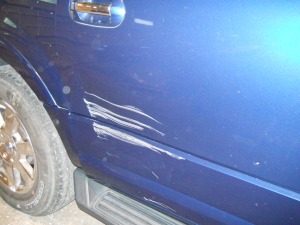 This Ford Expedition is a little scraped up after it’s run-in with a tractor. I guess it could have been worse, but it still left a pretty good mark as you can see in the first two pictures.

After banging the door back into its rough shape using a hammer and a slide hammer, I applied some body filler to further smooth door. After the body filler, which you can see in the third picture, dries it can be sanded smooth.

The last two pictures show the bruised areas after being sanded and a coat of primer applied. The fourth picture is the repaired area of the door and the last photo shows the door molding, removed from the car and on the paint stand.

Now that the damage is repaired, all that is left is to make it disappear.