You need to have pull

This Cadillac SRX arrived at the shop today with a spot on the fender where the driver had gotten a little too close to something, leaving a dent in the fender. As you can see in the first picture, it isn’t a huge dent, but it is a bit to0 deep to fill with body filler.

Body filler is designed to cover only small imperfections in the metal, not to fill large dents. When used properly body filler, commonly known as Bondo, is a very good product and can save the customer a great deal of time and money. It is people using it improperly, such as filling in this dent would be, that has given body filler a bad name.

My reputation, and the reputation of JMC AutoworX, is too important to me for me to risk on taking short cuts so we take the time to do a repair correctly. In this case, the dent needed to be pulled before we could smooth it over with body filler. Pulling a dent takes a bit of finesse, but it really isn’t that difficult a task to perform.

Pulling a dent involves the use of a handy tool called a slide hammer. The way the tool works is a stud, just a bit of metal like a medium size nail, is welded to the metal in the dent. A slide hammer is then attached to the stud and a heavy metal weight, mounted on the tool, is slid forcefully down the length of the slide hammer to strike the stop. The force of the blow pulls the bend out of the metal. By varying the number of strikes and the force of the blow you can tease the metal into shape. A clever, if low tech, solution. You repeat this procedure in various places of the dent until the metal is pulled back into it’s proper shape. If the metal is pulled a little too far, you simply tap it back down with a body hammer.

Pulling a dent requires some skill, and time, to do properly. On a large dent it is often times cheaper to simply buy a new panel than to spend the time banging away at the metal, but on a small dent like this, the slide hammer is just the ticket.

After the dent has been pulled, the studs are cut off and ground smooth. That is the what is happening in the second picture, with the pulled dent ready for filler visible in the third photo. Monday I will skim over the repaired dent with a bit of body filler and sand it smooth and then the car will be ready for the paint booth. 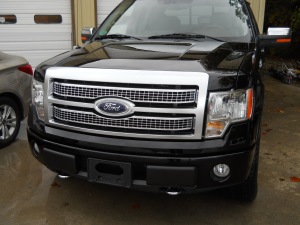 Now that this Ford has it’s new sheet metal installed, been painted and then washed, it looks a little better than it did a few days ago.

In fact, dressed in basic black this truck makes me think of a bouncer in an expensive three piece suit … sophisticated yet intimating at the same time.