← Big wheels a rollin’
The difference is clear →

T’is but a scratch 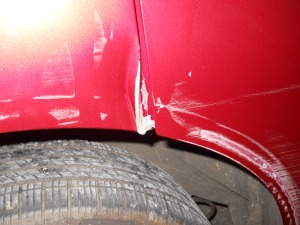 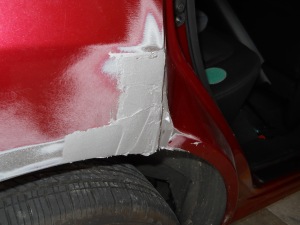 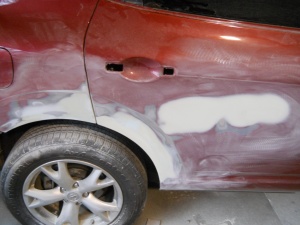 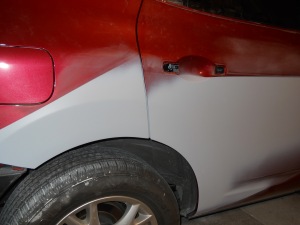 We have had a run of Rogues in the shop lately. First the black Nissan Rouge from a couple of weeks ago and now this red one.

Where the black Rogue suffered from a severe case of road rash, this Rogue got up close and personal with a buggy corral. The worst part is visible in the second picture. That’s a nasty bend where the corral caught the edge of the rear quarter panel and bent the per-diddle out of it. You can’t smooth something like that with body filler, so there were two options for the repair … replace the rear quarter panel, or pound it out.

We decided to see if we could pound out the dent before we went to the more drastic step of cutting off and replacing the rear quarter. If we could pound the dent out it would much less expensive for the owner, and if we couldn’t, no harm done.

You can see in the third picture that we went to work on it with our handy-dandy slide hammer. The copper colored sticks are the studs, and the heavy looking gizmo attached to one of the studs is the slide hammer. The direction the studs are pointing indicates which way we intended to pull the metal. With a really nasty bend like this one, the car can end up looking like a porcupine.

After banging away with the slide hammer for a while we were able to tease the metal back into a shape that closely resembled the original body line. The fourth picture shows the results of all that hammering and yanking. Looks pretty good actually. Those dark marks that look like holes are actually the low places left after the body was teased into shape.

The next two photos, numbers five and six, show how we fix that. The whole area is slathered with a layer of body filler. The filler will fill the small holes and allow us to sand smooth all the tiny imperfections left after pounding the body into shape.

Now that the crinkle has been removed from the paint, the rest of the side of the car received some attention. The next photo in the series shows the door after it has been sanded. Sanding the paint revels imperfection in the bodywork that would otherwise be difficult to see. Notice the spots that look different than the uniform white of the sanded paint that surrounds them. Those are high places that will have to be repaired, as small as they are, lest they show up in the paint later. A thin layer of body filler to smooth the lines is all that is required.

Photos eight, nine and ten, show the car after all the filler has been sanded smooth and the paint is prepped for priming.

The last three photos are of the car after application of the primer. Other than the obvious difference in color, the car looks good. The door and quarter panel seam as straight and even as the day it left the assembly line and the little bumps and rub marks are smoothed out and primed over.

I’m happy the with results of our metal work and we were able to save the customer a considerable amount of money by not having to replace the quarter panel, which should make them happy.

After the application of paint and reassembly, the car will be good as new … just in time for the holidays.

← Big wheels a rollin’
The difference is clear →