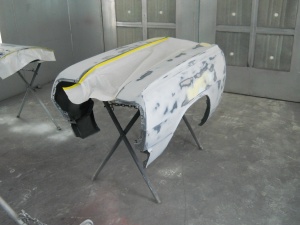 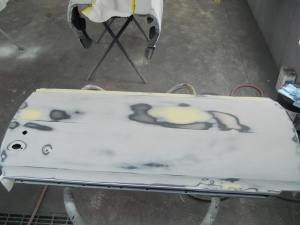 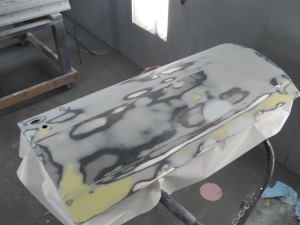 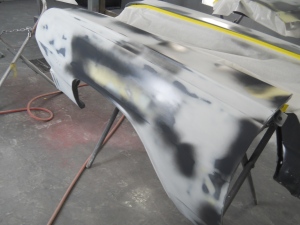 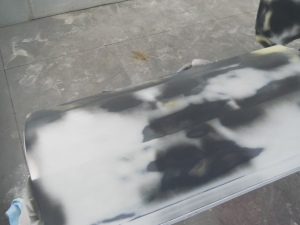 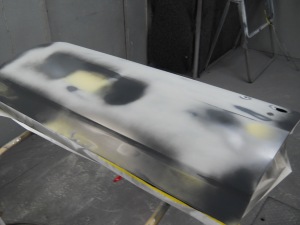 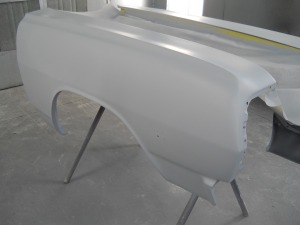 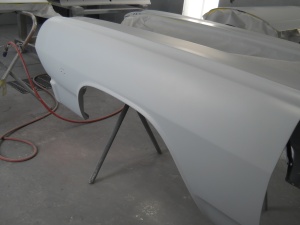 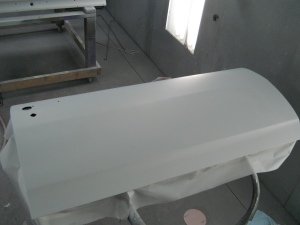 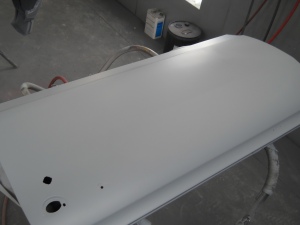 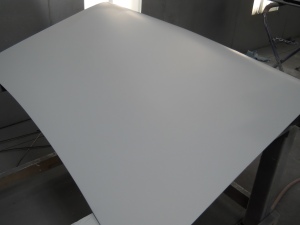 We spent most of the day yesterday sanding off the primer we had put on the day before. Today … we sprayed primer back on. Not the same primer mind you, but a urethane filling primer.

The first three photos show the fenders and doors after we sanded most of the Slick Sand primer off. It left a lot of bare metal and a mottled look. Not the best combination for a high end paint job.

The next three pictures show where I touched up the panels with a squirt of bare metal primer over the places we had sanded through the primer to the metal. The bare metal primer provides rust protection for the metal and gives the coatings that follow something to adhere to.

The urethane sealer is available in seven shades of gray, from nearly white to almost black. Each of the seven shades of gray is matched to specific colors so that the paint looks as designed. I have samples in my office where the same color is sprayed over primers that are only one shade different and it makes a noticeable and obvious difference in the how the color looks. Those samples make it very clear why a consistent colored base is so important.

The last three pictures show the panels after the urethane primer has been applied. Notice how the color is an even light gray instead of the mottled medium grays, blacks and yellows as before. After the primer dries the panels will be blocked again.

Blocking,  sometimes called long blocking, is the technique of wraping long blocks in sandpaper. Using the blocks during sanding prevents the person doing the sanding, which would be yours truly and/or Jordan, from introducing imperfection due to uneven sanding. This time we will be sanding with a much finer grit of sandpaper, to further smooth the surface and to make it ready to receive the next layer … paint.

If you want to know what it’s like working in a body shop, look up Sisyphus from Greek mythology. 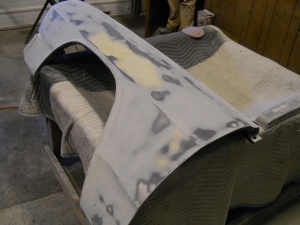 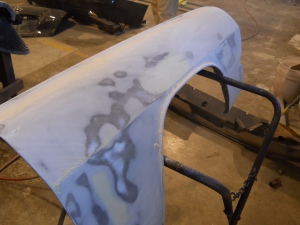 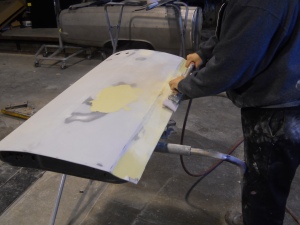 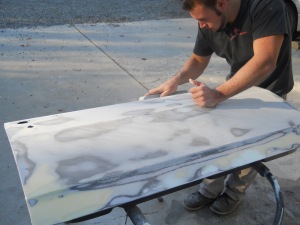 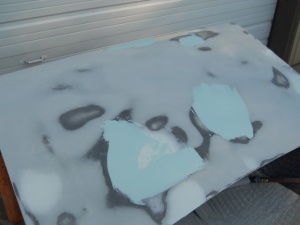 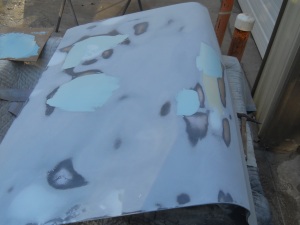 After the Slick Sand high solids primer has dried the body panels are long blocked. Long blocking is the process of wrapping a length of sandpaper around a long semi flexible block which is then used to sand the panel.

These six photos show the long blocking process. The first two photographs are of the fenders, the next two are of the doors and the last two are of the trunk lid. As you can see in all these photos, the panels were quite wavy. The long blocking shows this by the bright places were the Slick Sand was sanded completely away, through the primer, all the way to the bare metal. The yellow and green splotches you see is body filler applied to areas where the ripples were more than the Slick Sand could overcome. By skimming over the low places with a thin layer of body filler to build up the low spot, we could then sand it back down to smooth.

Understand, the differences we are talking about, from the highest place to the lowest, is mere tiny fractions of an inch, not even enough to see with the naked eye in bare metal. But the differences are enough that a skilled hand can feel the ripples and the differences would most certainly show up in the reflections in the paint.

This Slick Sand and blocking process is not done on every car. This is an expensive and time consuming process that is over the top for most daily drivers. But when you want the best paint finish possible this is an absolutely necessary step to remove all the imperfections in the bodywork so they don’t show up in the paint later. Like building a house, everything starts with a good foundation.

After blocking the panels will be primed again, partially to cover the bare metal spots to protect the metal from rust and give the paint some bite in those areas, but also to provide a uniform color base so the paint color is even and to further smooth the surface so the paint that is laid down is as smooth as possible.

We’ve made some progress, but there is still the body of the car to go … and it gets the same treatment as these panels did. Oh well, it’s a good upper body workout out. At least that is what I keep telling myself.