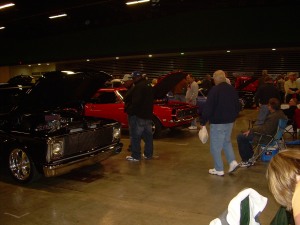 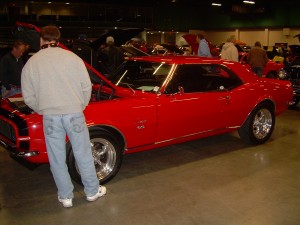 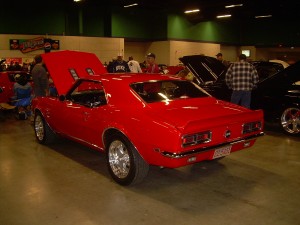 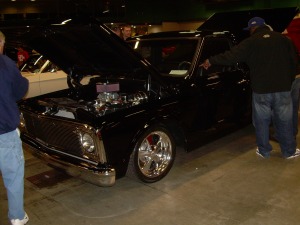 The 2012 Shiner’s Drag Racing and Hot Rod Expo turnout was a bit of a let down from last year. Last year the show filled both sides of the exposition center and overflowed into the Pavilion. This year it barely filled one side of the exposition center. Was it the economy or was just a bad weekend for a car show? Who knows? That’s the not so good news.

The better news is the caliber of the cars that showed up was very high. This year JMC AutoworX brought three cars, same as last year, to the show. Unfortuntaly the 1969 Mustang didn’t make the show since the interior install wasn’t complete, but I did bring two previous projects … Scott’s 1971 Chevrolet C-10 Custom-Rod and Rufus’ 1968 Chevrolet Camaro. This is the second year showing both of these cars at the Shriner’s show, but the first time they have been here together. Scott’s truck was on display two years ago, Rufus’ Camaro last year. Both cars, along with the JMC AutoworX 1960 Volkswagen Karmann Ghia convertible, were real crowd pleasers. Each of the cars drew a lot of attention and positive comments, and all three took home a trophy.

Like every year I met a lot of very nice people. Some that have cars in the show, most came just to see, and drool, over the cars at the show. I did a bit of drooling myself.

Of particular interest to me were three El Camino’s at the show … two ’68’s and a ’69. The cars were exceptionally well done and I gave them a really close once over, looking for ideas for the El Camino that will be showing up at the shop later this year. In fact I called Terry, the owner of the El Camino I will be working on, and told him to get down here, and to bring his camera.

Another favorite was an ultra-rare Chevelle, an all original #1 car worth more than a million dollars. It’s sister car, #16 of 16, recently sold at action for over $900,000 dollars. It has been restored of course, but it has been restored to factory specs and it was simply stunning. This car has one of those stories you hear about every now and then where the owner found it sitting it in a barn. The previous owner didn’t know what he had and the current owner bought it for next to nothing. The twist to this story is, the current owner didn’t know what he had bought either … until he was contacted by GM. The owner now has the original GM documentation on the car, proving that it is what the owner claims it is. It is not my place to say, but let’s just say the owner could make a significant profit off the car were he to ever sell it.

There were plenty of other very nice cars there, but these are the ones that stick out in my mind. I did take pictures of some of the other cars, but I am a bit hesitant to put the pictures up on the site. Just like I wouldn’t like someone else getting credit for my work, I wouldn’t want to get credit for someone else work, even if it were inadvertent.

It was a fun, if  long, day and a half. I had planned on staying one more day, to participate in the Volkswagen show on Sunday, but my feet were getting tired from standing on the concrete all day. I decide to pull the plug on that show and spend the time at home, with my family.

I always enjoy these show. I get to see a lot of nice cars and meet even nicer people. Not a bad way to spend a couple of days.