Not getting older … getting better 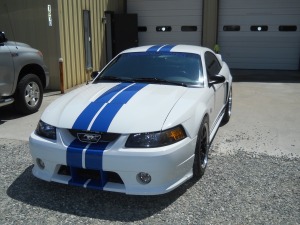 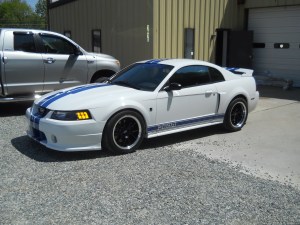 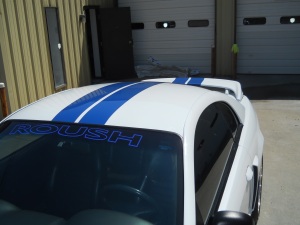 This Roush Mustang, in the shop for a Touch Up Grande, is ready to go out and strut it’s stuff. All the little dings, the road rash if you will, has been touched up and it looks good. Especially considering it is 10 years old.

But like wine and cheese … some things just improve with age. 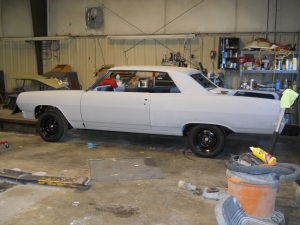 It’s not much progress, but it is progress.

We got the left door and fender mounted on the car to check the fit. The lines don’t quite match up, but then we just stuck it up there to see how chose we were after the struggle to get the body on the frame.

After we do some adjusting the fit will be much better. 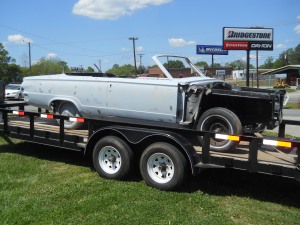 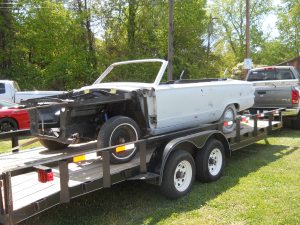 This 1963 Dodge Dart convertible arrived at the shop ready for paint. The owner has already performed the majority of the prep work on the body so all I have to do is clean it and shoot it. The owner will then come get it and take it back home for assembly.

This will be another one of those quick turn-around jobs … in and out of the shop like a Dart. 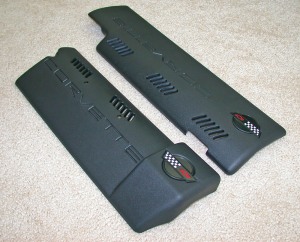 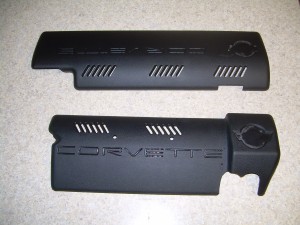 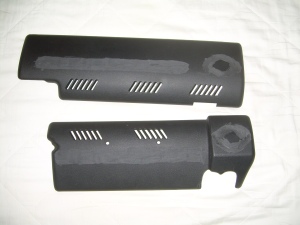 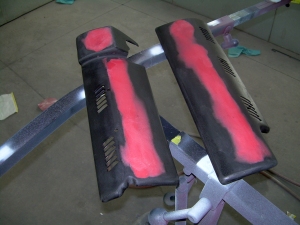 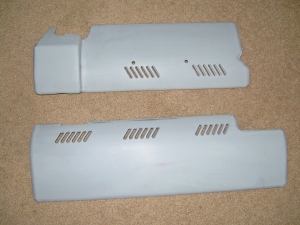 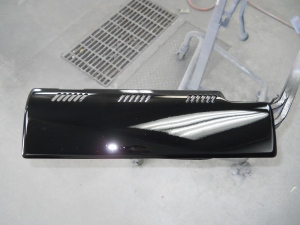 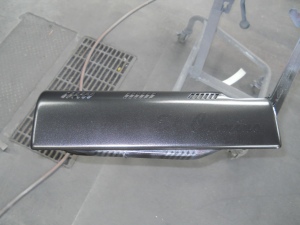 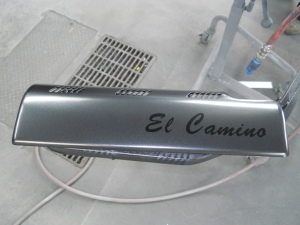 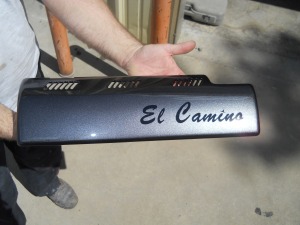 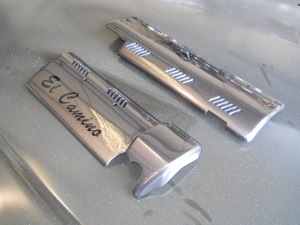 Terry’s 1969 El Camino is going to have a number of subtle custom touches. For example, the engine going into the car is a LT1 small block he lifted from a 1997 Chevrolet Camaro. Where GM saw fit to dress up the engines of their LT1 Corvettes with nice covers to hide the fuel injection plumbing, the down market Camaro did without. To complicate matters, the Corvette fuel rail covers won’t fit the Camaro engine. Well … not without a little help.

The first picture shows the stock fuel rail covers available at any GM dealer for the Corvette. A nice, inexpensive way to dress up an LT1 engine.

The second picture shows the covers after they have been modified to fit the Camaro engine. The modification involves cutting some notches in the left (driver’s) side cover. Murphy Rod & Custom performed the modification. The Corvette logos have also been removed.

The third photo shows where I ground out the word Corvette and smoothed the sides of the notches where the emblems were glued in. This was done so the material I used to fill and smooth the covers will provide complete and smooth coverage.

The fourth photo is the covers after the filler has been smeared over the ground out area. The stuff I used is like body filler for plastic and it is some gooey sticky stuff, but once it bonds to the plastic … it is there forever.

The next picture, the fifth, was taken after the filler was sanded smooth. Just like regular body filler, the blocking process smooths the surface by removing material from high spots until the surface is dead level and smooth.

After the filler is sanded smooth, the covers are coated with a thick layer of primer to further smooth the surface and to provide a surface that promotes good adhesion with the paint that follows. Once again, the covers are sanded, with a finer grit paper this time, until the covers are as smooth and even as possible. You can see the covers, ready for paint in the sixth picture.

The seventh picture is of one of the covers painted. The covers are first sprayed black so that the stencil, when placed on the cover, will protect the black paint from the gray paint that is following. This will cause the black paint to show through the gray after the stencil is removed.

The next step, after the black paint dries, is to place the stencil on the cover. There is no picture of the stencil because the stencil was black also and couldn’t be seen. But its there, you’ll see.

In picture eight you can see the entire cover is again painted, this time in gray. If you look closely you can just make out the outline of the stencil.

Photo nine shows the cover after the stencil is removed. This reveals the black paint underneath. This photo was taken before the clear coat was applied so the paint looks a little flat. But I’m about to fix that.

Picture ten is of me holding the cover after the application of the clear coat. As you can see, the clear really makes the colors come alive. This cover, taken in the sun, shows the color combination the owner selected for the car. The paint is still green in this photo so it is definitely Handle With Care.

The last photo is of the finished covers. Taken inside the shop with a flash the color looks silver, but it is actually a rich, dark gray, as shown in the tenth photo.

The owner of the car wanted to do these covers up early in the build so he could check his color choices. Judging by this reaction when I showed them to him, I would say he was happy with his selections.