This morning, bright and early, I arrived at the Murphy Rod & Custom shop to determine what needed to be done to get the bottom of the El Camino finished up. On Thursday we sanded the heck out of it, and today I wanted to try to get it undercoated.

The first photo shows the El Camino in the background. Kelly had pushed the car to the loading door for better light and ventilation while we finished preparing the bottom of the car. But mostly, I just used this shot as an excuse to take a picture of my truck.

The second photo caught Kelly and I discussing the best way to accomplish all the things that needed to be done today. I’m the one standing on the right in the gray t-shirt.

The next three photos, numbers 3, 4 & 5, show me cleaning and preparing the bottom of the car for the application of the epoxy primer. In picture number three I am blowing all the sanding dust off the car with compressed air. This is the best way I know to get all the loose dust and debris off the car.

The fourth photo has me digging in the corners with a screwdriver, digging out old sealer and gunk that wouldn’t sand off. It is important to get the car as clean as possible prior to priming so the primer will stick.

The fifth photo has me wiping everything down with a strong cleaning agent to make sure all the dust and oils have been removed. The metal might look clean, but I turned several wiping cloths black before I was satisfied that the surface was truly clean.

The sixth photo shows the bottom of the car after the application of the epoxy primer. The epoxy primer is, more or less, a sprayable glue that dries to a super-hard surface that seals and protects the metal from the elements. It is the epoxy primer that binds to the metal and forms the foundation upon which all the other layers are built.

After the primer had dried, I went over all the welds and seams with a seam sealer that prevents water from working its way into the seams and starting rust. Rust never sleeps and anything that we can do on these types of builds to prevent the rust from getting a toe-hold, we do. You can see some of the seams protected thus in the eighth photograph.

The last two photos, numbers 9 & 10, show the car after the Raptor Liner has been applied. The Raptor Liner is a light duty bed liner that works great as an undercoating, provideing another layer of protection to the bottom of the car. It works as yet another sealer against the elements and provides a super tough barrier to rock chips and other damage. And it looks fantastic at the same time.

Now that the bottom of the car has been protected as much as possible, Murphy Rod & Custom will put the chassis and body back together and begin to fit the rest of the sheet metal on the car.

Then I can start work on making the top as nice as the bottom.

This ain’t the Dukes of Hazzard 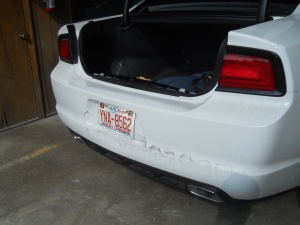 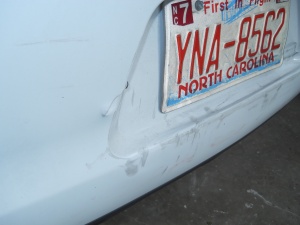 On the television show Dukes of Hazzard, Bo and Luke Duke charged (no pun intended) around Hazzard county in a 1969 Dodge Charger. This car is white instead of orange and there isn’t a rebel flag to be found on it. But the most important difference between real life and television … when someone hits your car, the car gets damaged … unlike the Charger on the television show.

You can see in these photos that the Charger took a pretty good whack in the back end, scuffing up the bumper pretty good. Fortunately the car isn’t seriously damaged and we will be able to fix it up so no one would ever know anything had happened to it.

The Duke’s Charger survived all manner of abuse with nary a scratch, but this Charger gets roughed up by a comparatively minor dust up. Dodge sure doesn’t build them like they used to.