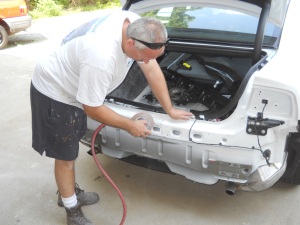 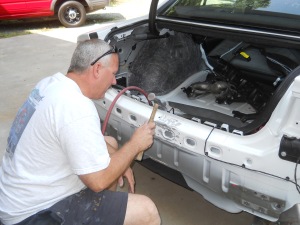 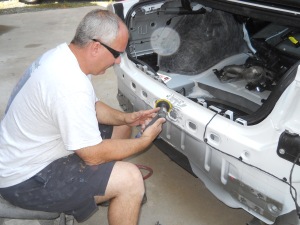 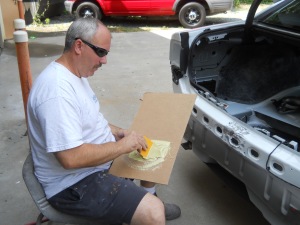 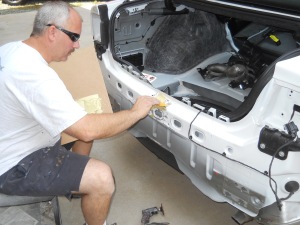 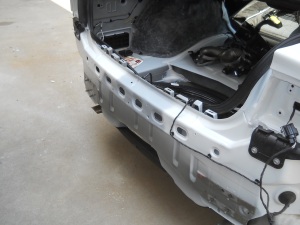 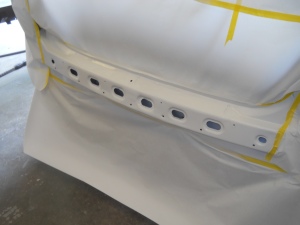 We received the Charger back from the frame straightener yesterday and immediatly began work on finishing it up. With the bumper and bumper support painted on Thursday, all we had to finish on the car is the cleaning up of this repair and the car would ready to assemble.

The first picture shows the car as we received it back. The bent support was straightened, but a fame machine isn’t designed to completely repair a bent place, only to pull the car back into factory specifications. It is up to the body man to make the repair pretty.

In the second picture I am pecking away at the repair with a body hammer, pounding down a high spot. Even though this bit of the car is completely hidden behind other bodywork, I wanted the car to be as near factory perfect as I could make it … even if some of the repairs cannot be see. It’s just how we roll here at JMC AutoworX.

After pounding down the high spots, you can see in the third photo that I started grinding the paint off the creases and folds left by the crash and straightening process. The frame machine got the metal close, but I needed to tease a couple of low places out a bit using a slide hammer. For the stud to stick to the car properly, it needs to attach to clean metal … and clean metal means no paint. Using the air grinder made short work of removing the paint.

The fourth, fifth and sixth photos show how a dent is pulled using a slide hammer. The fourth photo has me welding a couple of studs to the car. A stud is just a piece of metal that looks like a copper colored nail. The stud is attached to the car by the stud gun, the big yellow thing I am holding in my hand. You insert the stud in the gun, press the end against the car, and pull the trigger. In just a couple of seconds the stud is welded to the car and the gun can be removed.

Oh, and a bit of advice … if you ever use a slide hammer … you need to keep your fingers, and especially the web of skin between your thumb and first finger, behind the anvil. Ask me how I know this.

After the dents are beat out, the studs are ground off smooth, which is what I am doing in the sixth picture. Once again, the air grinder made short work of the job.

The next three pictures, numbers 7-9, have me smoothing over the repair so it becomes invisible. Well, it would be invisible anyway because it is covered up by other bodywork, but you know what I mean.

In picture seven I am mixing the body filler. Body filler has gotten a bad reputation over the years, a reputation it doesn’t deserve. Body filler is designed to fill and smooth shallow dents. That is why I pulled the metal out first with the slide hammer. I could have filled the dent with filler and sanded it off, and it would have looked great for a while, but the thicker the body filler, the greater the chance for it to crack or fail. Better to make the repair right and use the product as intended. Used properly, as in this case, the body filler will last the life of the car.

After the filler dries it is sanded until the filler matches the lines of the car and is smooth. You can see me sanding away at the repair in the ninth photo. Once again an air powered tool, in this case a DA (Dual Action) sander, makes short work of it. Unfortunately, the sander can’t reach into all the nooks and crannies, so even with the best tools, you really can’t replace the Mark I sander … your hands and fingers.

After all the body filler is sanded, I masked off the area and shot it with primer. The primer covers and protects the repair so that it can’t be attacked by the elements. It also provides a surface that allows the paint to really sink its teeth into for good adherence. You can see me priming the car in the tenth photo, and the primer after it dried in picture eleven.

The last three photos, numbers 12-14, are the car being painted. The car is carefully masked to prevent the paint from going places you don’t want it to go. The last step right before painting is always to clean the surface thoroughly with a cleaner that removes any dust, wax and oils. That is what Jordan is doing in picture twelve.

Pictures thirteen and fourth show the car after the repair has been painted. Even though this part of the car will never be seen, well, unless someone takes it apart, it looks as good as it did when it rolled of the assembly line.

The reason we do this is really very simple. My good name is on the line here, and I take a lot if pride in the work that Jordan and I do. I repair every car that comes through the door as if it were my own. Had this Charger been my car, I would have fixed this spot, even though it would never be seen. I figure if I’m happy with the repair, the customer will be happy with the repair. That philosophy has worked out pretty well so far. 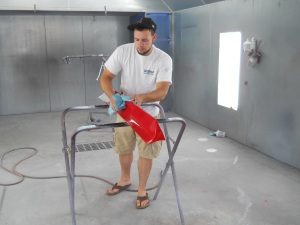 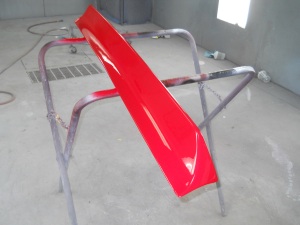 Thursday we got this spoiler sanded to make it ready to paint again. Yesterday we cleaned it up and got it painted.

The first two photos show Jordan cleaning the surface of the spoiler, removing any sanding dust and oils from our hands left on the surface from handling it. From now until the last coat of paint is dry, we will not touch it again with our bare hands.

Picture three shows the sanded area covered with sealer. The sealer seals the material below and provides a good surface that promotes good adhesion for the paint. What ever the problem was the last time, it was a failure in the sealer because that is what lifted off, not the paint itself.

Photograph four shows me putting down the base coat, the actual red paint in this finish. The base coat is applied in several thin layers to ensure good coverage without runs.

Picture number 5 shows some nut with a paint gun, goofing off instead of tending business. Actually the nut was just waiting for the previous base coat layer to dry, and while doing so was expressing confidence that this time the paint is going to stick, and stay stuck. Yes, we enjoy our work here at JMC AutoworX.

The last two photos, numbers 6 and 7, show the spoiler after the application of the clear coat. The base coat dries to a near flat finish and it is the clear coat the provides the pop and zing of the automotive finish. The base coat appears shiny in  the fifth picture because it is still wet.

Now that the repair is made I am confident it will now last the life of the car. Of course I thought that the first time I painted it too. But if I’m wrong … well … I will paint it again.