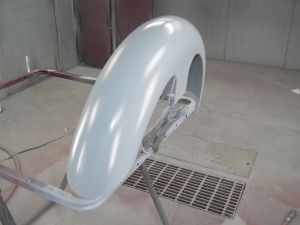 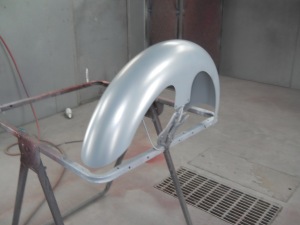 Sometimes all it takes to make a bike your own is a different style of fender and a dash of paint. Such is the case for this proud Harley-Davidson owner.

Not completely happy with the styling of his motorcycle, he is replacing the stock fender with this aftermarket unit. But, in order to complete the look, the fender needs paint.

The first picture shows the fender after the application of the sealer. The sealer is the last step before paint and it functions to seal the materials below, provide a consistent color for the base coat, but most importantly it fills any tiny imperfections and provides a smooth surface that the paint can get its teeth into for good adhesion.

The last photo shows what I mean. After the clear coat is applied the paint has a much deeper, richer, color than before the application. The clear coat also provides a protective coating to protect the base coat from damage and fading.

Taken together, the sealer, base and clear, form the long lasting, durable, finish on your car, truck, van or SUV. Or, as in this case, your customized Harley-Davidson motorcycle.

In a bit of contract work, this new Hyundai Accent bumper was sent to me for paint. On simple repairs, like replacing a bumper skin, a lot of people like to save a few dollar and do as much of the work as possible themselves. Normally I need to have the car to blend the paint into, but the nice thing about black is that in this case black is black, and the paint will, almost always, match perfectly.  However there are a few occasions where it doesn’t.

The first photo has the replacement bumper in the booth ready to go. The last two photos are of the bumper, painted and ready to go. Well, as soon as the paint dries that is. 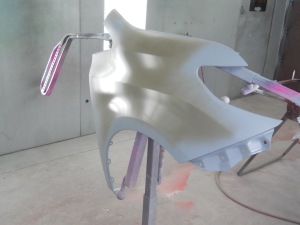 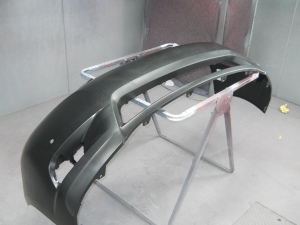 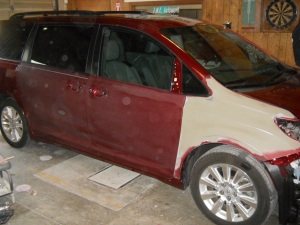 Yesterday we took this Senna apart. Today, we started making ready to put it back together.

The first photo shows the fender in it’s factory rust preventive coating. It looks nearly white in this photo, but it is really a shade of green.

We started by trimming out the replacement front fender. Trimming out a part is painting all the most places that are difficult to impossible to reach once the body panel is installed on the car, most notably the back and edges. You can see what the trimmed out fender looks like in the second photo. It’s not hard to trim out a body part, but it is an important step for a quality repair.

After the fender was dry enough to handle, it came out and the bumper went in. The third picture shows the raw bumper, ready to receive its paint.

Pictures four and five show the bumper after the application of the base and clear coats. This two stage paint process, base and clear, produces a deep rich finish that will last the lifetime of the vehicle.

The last photo, number six, is the Senna with the fender installed, ready to paint. You will notice that the side of the van has been sanded as well. This is so we can blend the paint from the front fender and repair a couple of small dents, unrelated to the front end damage, on the back door.

It is extremely difficult to mix color and achieve a perfect match in color. As an example, there is no such thing as red paint. The paint one might call red is actually made up several different pigments to make the color you see. Any variation in mixing the paint, a variation as small as the size of a single drop of pigment, can produce enough difference in the color that the human eye can detect the difference. But … only  if the two colors are adjacent and divided by a clearly defined line … like where a fender meets a door.

Blending is a technique to disguise the transition from the old paint to the new by feathering the new paint into the old. This denies the eye that clearly defined edge where the two colors can been seen in sharp contrast. It is a trick nearly as old as auto painting itself, but it works, and it works very well.

Looking at that last photo, it looks like it time to clean the lens of the camera again too. Being a camera in a paint and body shop isn’t an easy life.