Guess what Chris did today? 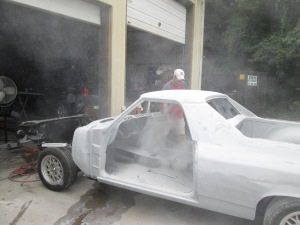 While I cleaned up around the shop and painted a speaker enclosure, Chris was … what else … sanding on the El Camino.

The first photo shows Chris blocking the quarter panel on the car. Blocking is a sanding technique where a piece of sandpaper is attached to a semi-ridged foam block. The block allows the attached sandpaper to really dig into the high spots while at the same time skimming lightly over the low spots. This has the effect of sanding the high ridges off until they are even with the low spots. This leaves the surface being sanded ultra-smooth.

The second photo shows just how dirty a job sanding a car is. Chris is using compressed air to blow the car clean so we can see what additional body work the car needs. And believe me, it needs some.

The third and fourth photos show the car after the car has been completely blocked. You will notice in the photos that the car has a splotchy appearance. This is because after blocking this car isn’t perfectly smooth and even. It is going to need a little more work.

Not only does blocking leave the surface dead smooth, it also reveals any imperfections in the surface, and this car has some. The shiny silver areas are places where the block cut through the high solids primer all the way to metal before the high spots were even with the lower spots. The dull areas are places where the block never touched the primer because the low area was so low that Chris hit metal on the high spots.

It is not as bad as it looks, but there is going to be some body work … okay, a lot of body work … this thing has more waves than the North Atlantic … before this car is going to paint. But none of the problems are so bad that a bit of body filler can’t fix the problem.

Picture five shows me using fiberglass reinforced filler, called Kitty Hair believe it or not, to fill the area around where the rain gutters were removed and the roof was attached to the car when it was built. The Kitty Hair is some super strong stuff that will provide a much tougher repair than straight body filler would. You can see in picture six that Kitty Hair is nasty looking stuff that is rough and full of “hair.”

After allowing the filler to dry for an hour or so it was sanded smooth, as you can see in the last two pictures, numbers seven and eight. Because the Kitty Hair is difficult to spread smoothly, after sanding it still had some spots that needs more work. But it filled the areas enough that regular body filler can take care of the rest when I come back and fix all the other places on the car.

Next week I am on vacation so no work will get done, but this car has come a looong way in just over a week. The fenders and hood are all but ready to paint, and after today the toughest part of preparing the body for paint, blocking the high solids primer, is complete.

If we’re lucky, we may have some color on this thing in a few weeks.