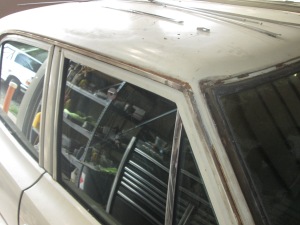 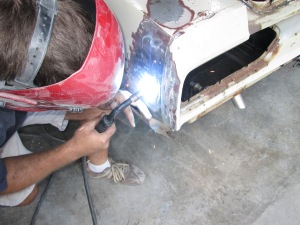 Today we started taking the Satellite apart and began the work needed to make the car ready for paint.

Before every paint job there is sanding. My daughter, who you see in the first picture, helped out with the sanding. She was visiting at the shop this morning and announced she was soooo bored! I put the DA (Dual Action) sander in her hands and said, “Here, sand this.” It’s funny … after about 20 seconds with the sander she realized she wasn’t bored after all.

The second picture shows the chrome molding around the drip rails removed. Police cars didn’t have chrome drip rails, and now this one doesn’t either.

While I was busy putting the final smooth on the El Camino, Chris was busy welding up trim holes in the side of the car. Like the chrome drip rail moldings, police cars didn’t have the molding down the side of the car either. But unlike the drip rail moldings, the side molding had holes that needed to be welded up. You can see Chris busy welding up the holes in the third photo, along with his completed handy-work in the fourth.

The last two photos show where we have removed the front and back of the car. Doors, hood and trunk lid all have to come off yet, but we made a good start on getting all the bits and pieces out of the way so we can start sanding. Oh … joy.

Well, at least we won’t have to sand that little spot on the left rear quarter.

Are we done yet? 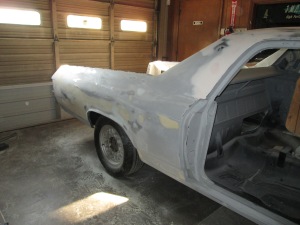 Dent removal and smoothing on the El Camino is very nearly complete. We had other work in the shop today so we couldn’t devote a lot of time and people to the car, but I did manage to finish getting the left side blocked and ready for primer.

The first photo shows me blocking out a place here, a place there, smoothing over the last few little imperfections on the left side of the car. You can tell how much I enjoy this part of a job by the look on my face.

The second and third photos show the rear quarters after we completed blocking them. There is a lot of filler, time and sore arms in these two panels, along with the roof, but I am satisfied that they are as smooth as I can get them, even smoother than they were when new. There is an area around the rear glass where some rust was repaired that I want to run a light skim of filler over to make as perfect as the rest of the car. Even though the rust repair is in a spot that will be mostly covered by trim, and is underneath an overhang that makes the remainder difficult to see, this car has come to far to start skimping now. The area to repair is small, and after this final bit of smoothing is done the El Car-Truck-o will be ready to roll into the booth for the final prime.

And speaking of final prime, we did manage to squeeze in a final block and sand with the DA (Dual Action) sander on the doors. The doors received their final prime earlier so the blocking with a very fine sandpaper, much finer than we have used for sanding to this point, smooths the doors down to perfection. After blocking, buzzing over the doors with the same fine sandpaper on the DA sander removes the blocking marks, smoothing the doors even further. You an see one of the doors in the last photo, number four.

Assuming we don’t run into trouble I plan to paint the doors and everything forward of the windshield this week. I know the owner is ready to see the car in paint … and I have to admit, I’m kind of interested in seeing what it looks like myself.