Are we coming or going? 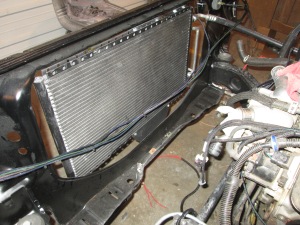 Today we worked on both front and the back of the car.

In the first photo the head-lamps are installed in the car. These head-lamps are the same unites that were sold in BMW’s for years … but with a bit brighter bulbs installed. If you look closely you can just see the blue bulb in the right most head-lamp. The bulb appears blue, but when energized it will light with a brilliant white light.

The second photo is of the back of the head-lamp. We had to modify the head-lamp bucket just a bit to let the new lamps fit.

The third photo shows how you get the power from one side of the car to the other. We will tuck these wires up out of sight once the radiator arrives and we get it installed.

The fourth photo is of the high-low head-lamp switch. This is actually a starter button that is functioning as a momentary switch. The wiring harness has a few optional extras in it, one of which is a flash-to-pass feature activated by the momentary switch when the lights are off. The switch is ultra-heavy-duty for this function, and nearly silent in it’s operation, so no more click-clunk when dipping the head-lamps.

The fifth photo shows where we are dividing the rear wiring harness from one loom that carries the wires from the fuse block to the back of the car into two looms to service various functions. The bottom of the “T” that runs into the grommet feeds the fuel pump, fuel gauge and the right side lamps. The left side of the “T” goes to the left side tail-lamps. The larger loom on the right side goes back to the front of the car to the fuse block.

In the sixth photo, we are further sub-dividing the harness. In the extreme upper right of the photo you can see the same grommet shown in picture five. The loom is threaded though the factory supports and then divided again for the fuel system, lamps and other functions.

In the seventh picture you can see another section of the harness fed along the extreme back of the car. That single little wire is for the backup-lamps.

The last four photos, numbers 8-11, show the tail-lamps going in. We actually were able to test these today … and I took pictures of them all lit up … but they were so blurry from camera shake that I didn’t want to use them. Trust me, they work just fine.

Another few days of progress like the last two and we are going to be ready to begin systems testing on the car. You know … to make sure the horn doesn’t turn on the wipers … things like that. 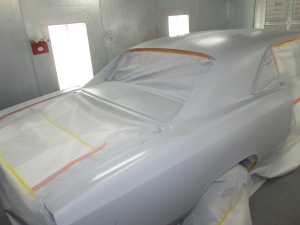 Now that the Chevelle is back from Throwback Custom Cars with the new rear window panel in place, the next step is to prime the car so we can, you guessed it, sand it again.

The first photo shows the car masked off to prevent the primer from getting in all the places we don’t want it. You can clearly see the new panel as it is black on an otherwise gray car.

In the second photo Chase is applying the urethane primer to the new panel. He will go on to prime the rest of the car.

The urethane primer is the final undercoat before paint. It seals and protects all the layers under it and provides, after sanding, an extremely smooth surface so the paint lays down nice and smooth.

The last two photos are of the car after it has been primed. The primer has a bit of a gloss in these photos because it is still slightly wet but after it is fully dry it will have all the gloss of a chalkboard.

Now that we are to this point, are nearly ready to paint. You could say this old Chevy is really in its prime.

I know, I know … that was a real groaner. 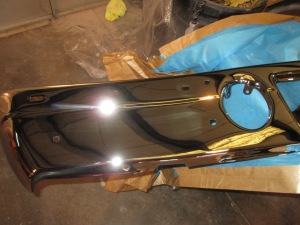 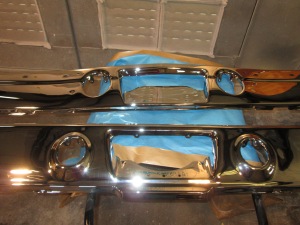 We need to get this El Camino finished up so we can get cracking on the Satellite. We need a place to put these.

Today we finished up this Toyota Tacoma so it could go home. We actually painted it yesterday, you can see the truck in the booth in the first photo, but this was the only photo I took of it yesterday. Sometimes I have a bad case of CRS, can’t remember stuff, and forget to take photos of the cars, and trucks, as we paint them.

Beginning with the second photo you can see what we did today. In the second photo Chris is lying under the truck tightening up the bolts that hold the bumper on. It would be … annoying … to have that freshly painted bumper fall off and be run over by the truck, so we always take care to make sure everything is securely tightened.

The last two photos, numbers three and four, show the truck after clean-up. The dimple in the front bumper and the small dent in the fender … gone.

And soon forgotten I hope.