← Something to look forward to
On the grille → 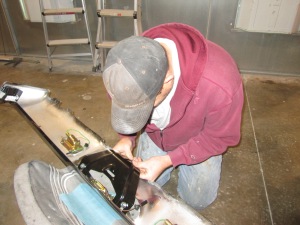 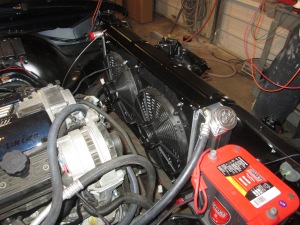 Today we worked on a little of this and a little of that on the El Camino. We seem to keep running into little problems that prevent us from fully completing a task … so we hop from one thing to another just to keep the project moving forward.

One thing we did get done today was the mounting of the rear bumper. In the first photo you can see Chris mounting some of the bumper brackets onto the bumper.

In the second photo Chris is under the car tightening up the various bumper brackets. When this El Camino project first arrived I advised, and after come cajoling the owner agreed to, lowering the car two inches. Now every time one of us has to get under the car I find myself asking, “What was I thinking!?”

Except for the addition of a license plate, you can see in picture three the back of the car looks complete. When this picture was taken we hadn’t yet hooked up the license plate lamp or the backup lamps. That is what those wires dangling from under the car are for, but we did get the lamps hooked up and working before the day was over.

After the rear bumper went on, we turned our attention to the installing the radiator. We had been waiting on it’s arrival, and what a work of art it is. It was almost to nice a piece to cover up, but cover it up we did. You can see the radiator installed in picture four. With the cooling capacity of 1,000 horsepower, I don’t think the owner of this El Camino has any overheating problem to worry about.

The radiator shipped complete with everything need to for the install with the exception of hoses and coolant. You can see the beautiful polished aluminum catch tank that came in the kit mounted to the firewall in picture five.

After installing the radiator in the car and attaching the included fans, the only thing left to do was to install the radiator hoses, wire the fans and pour in the coolant. Since it was late in the day and we didn’t have any hoses on hand, Chris (left) and I spent the rest of the day wiring up the fans. You can see us puzzling through the wiring harness that came in the kit in picture six.

Now that the radiator has finally arrived we nearly ready to try to start the car for the first time. We need to attach the radiator hoses and add the coolant before we try to start it, and we also need to finish plumbing the power-steering so we don’t ruin the pump by running it without fluid. But even with all that, I’m thinking next week we should hear some sound and fury from the old girl.

← Something to look forward to
On the grille →