This Mustang was the first collaborative effort with Murphy Rod & Custom. Murphy Rod & Custom took care of the heavy lifting in the metal repair and drive-train installation, leaving JMC AutoworX free to concentrate on what we do best. Paint and body. With a built 351 engine and upgraded brakes, this pony is ready to run with the best of them. 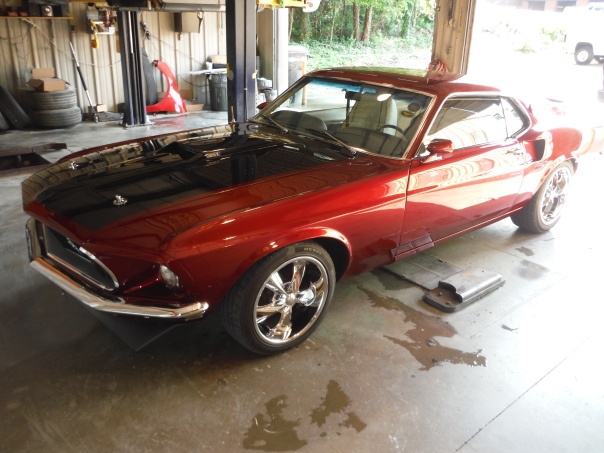 We are just about to wrap up this Mach 1. We had a storm come through a few weeks ago that damaged a few panels on this Mustang so we took care of that for the customer and while it was here we went ahead and buffed the rest of the car to get him ready for the upcoming show season. We also wired up sequential LED turn indicators that mount in the hood scoop for him.  We are waiting on a new hood molding to come in which will be the final piece for this hot rod. It will be ready to go once that part comes in.

We painted the Mustang today. This one is back in the shop to get some hail damage repaired from a couple of weeks ago. We did paint the hood on Friday, but I don’t think I got any pictures of that.  We started prepping this first thing this morning and a few hours later it looks like this. It really turned out nice. We will give this a couple of days to dry and hopefully we can start sanding and buffing it by the end of the week. Once that is done, we can get it put back together and back to the owner. Car show season is among us and I have sneaking suspension the owner will want to show this one off.

A couple of weeks ago, we had a storm here in Greensboro. The owner had been out earlier that day in his Mustang. The storm came up quick and included hail and high winds. Unfortunately this Mustang was caught up in it and was damaged by it. You may remember this car, we restored it a few years ago. Yesterday we started the repair by removing all that needed to be removed to ensure a quality job. Today we repaired the damaged areas and Paul sprayed a few coats of primer on the repair. Over the next day or so we will get the primer blocked out and the rest of the panels prepped for paint. We sure hate that this happened to his pride and joy, but we will get it looking all spiffy again in no time. 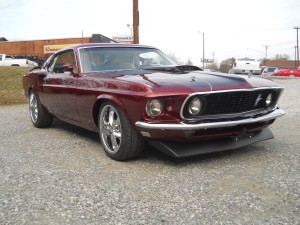 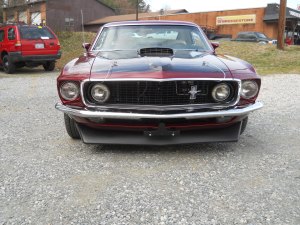 This pony is ready to run. With the last of the adjustments to the brakes complete, the hood scoop installed and the final check out finished, this car is ready to be returned to its owner.

Powered by a breathed on Ford 351 with  a big, aggressive cam, this pony announces to the world with its loping idle that within beats the heart of a destrier … antagonize at your own risk. Fitted with four wheel disc brakes, there is enough whoa to handle all the go.

This car has come a long ways since January of 2011 when it arrived at the shop, basically in boxes. Wise men have said, “It not the destination, its the journey.”

Perhaps so … but the destination is pretty good too. 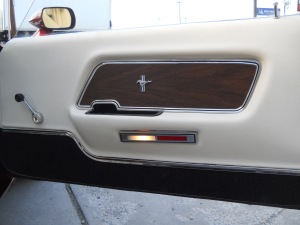 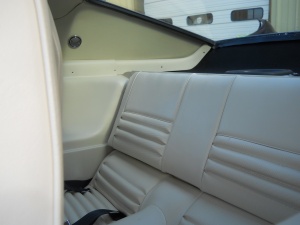 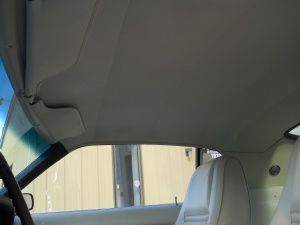 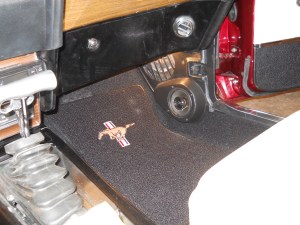 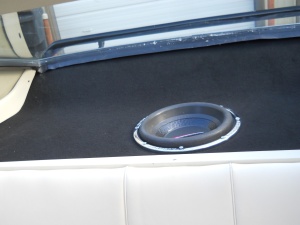 The Mustang is back in the shop after a couple of weeks at the interior shop. What a difference a couple of weeks makes! When the car left my shop back in December, the paint was looking pretty good, but it wasn’t a car. It had no interior and no glass so it seemed incomplete. Probably because it was. But now, with the glass and interior installed … now that’s a car!

The first four photos are just a quick walk-around, showing off the outside. It is odd how something you can barely see, namely the glass, can make such a difference.

The rest of the photos are of the interior. If you follow these rambles, you know I have a fondness for white interiors. My Karmann Ghia is bedecked in white. And this ‘Stang … it carries the color well. The white over black really jumps and the bits of wood add a dash of style as well.

The car is all but done. When the car left I was waiting on some hood emblems to arrive. They are here now so I can mount the scoop to the hood and give the car quick once over to make sure the paint is as perfect as I can make it. Then it is just a matter of checking everything to make sure there are no leaks, squeaks or rattles … the final LSR check if you will.

Once I am satisfied the car is ready for delivery, then Karl and Cassie … your chariot awaits. 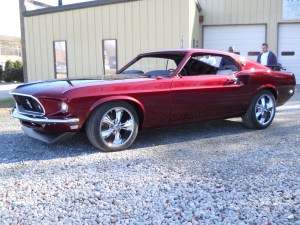 We are so close to finishing the Mustang I can almost taste it. We have completed the final buffing and almost all the trim pieces are installed. We are still waiting on the arrival of a couple of pieces that have been ordered for the hood scoop, but that is basically it. Once those two bits of trim are installed on the scoop, then the scoop on the car, I will be done with it. While we wait for the last couple of trim pieces to arrive, the car will be leaving for the installation of the interior and glass.

Because I have a shop full of work, and it was a nice day outside, I pushed the car out of the shop so it could bask in the sunlight. It also doesn’t hurt my business that in the sun the car looks … stunning, sitting out there drawing attention.

Cassie and Karl, the owners, stopped by to see the car today. They seemed to be quite pleased with the results. I can understand that … I’m fairly pleased with it myself.

It’s an inside job 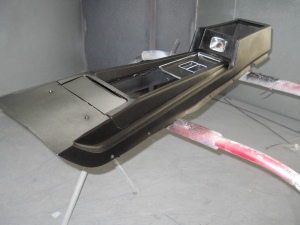 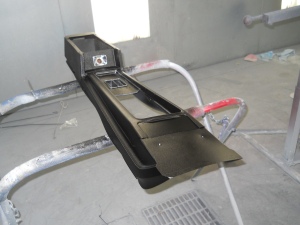 Since the exterior work on the Mustang is all but complete, we are turning our attention to a few of the interior bits. We don’t do interior work much beyond installing the occasional interior panel here at JMC AutoworX, but I wanted to freshen these old interior panels up with a new coat of paint. It just didn’t seem right to put old, dingy parts back into such a nice car.

The first two pictures show a couple of pieces of trim that go into the back seat and provide a place for the passengers to rest their arms.

The third picture is of a few small bits that are also being spruced up with a fresh coat of paint.

The last two pictures are of the center console. Those that are sharp eyed and really up on their Mustangs will note that this console has been fairly heavily modified. The modifications were necessary so the console would fit over the modern shifter that replaced the original Ford unit. The center was cut out to make room for the shifter, then the resulting hole is covered with a bit of brushed metal provide by Murphy Rod & Custom as a custom touch … no pun intended.

That Kelly Murphy guy and his son Josh … they are right handy with the metal. 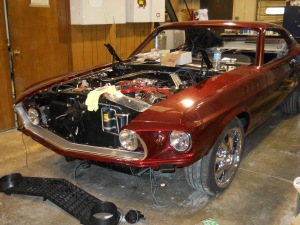 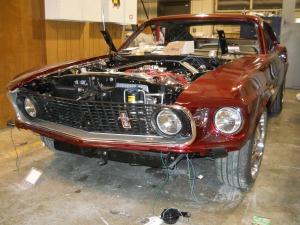 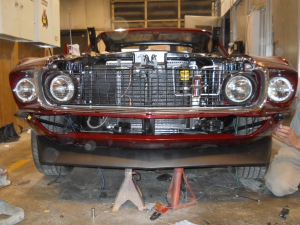 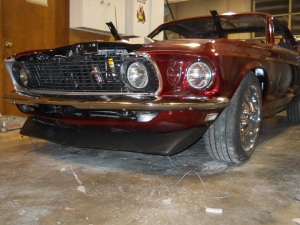 Now that the Cassie and Karl’s 1969 Mustang Mach I is back in the shop, we are hustling to get it done so it can go out to have the interior installed before the 10th Annual Shriners Drag Racing & Hot Rod Expo.  We have less than a month to get it finished, and while that should be enough time, it isn’t a lot of time. This will be the third year in a row that JMC AutoworX has been able to debuted a car at this show and I am motivated to make it. But we have to get it finished first.

The first photo shows the car as I received it back from Murphy Rod & Custom. They did yeoman’s work making this collection of part into a car by getting it running. Now it is up to us to finish our tasks so the interior guy can get his work done in time.

The first photograph shows the grille on the ground waiting to be put into the car. The next one shows the car after the grille is installed. Much better I think, but there is a bit more to do yet.

The rest of the photos show the front valence on the car. The third and fourth shots show Jordan putting the finishing touches the installation, but the rest are of the car after the valence is in.

You can see the car is hunkered down pretty low, giving it that ready to rumble look. There is a downside though … the driver is going to have to be careful to not knock over Mountain Dew cans sitting in the road.

Monday the hood will go on, then all that is left is just a few bits of things here and there.  Sort of like the final grooming before a horse show. After the interior is in … this pony will be ready to strut for the crowd. And I know just the place …

Yesterday evening I stopped by Murphy Rod & Custom to watch as Kelly started the Mustang for the first time. The owners, Cassie and Karl, were on hand for the big moment.

Last week Kelly got the car far enough along so that we knew when Cassie and Karl, who had asked to be there for the big event, were present it would start. It didn’t disappoint. A turn of the ignition and it burbled to life. Kind of anticlimactic actually, though Karl was jazzed. I cut the bit out because I was jiggling the camera, but you could hear Karl in the background exclaiming, “That’s what I’m talking about right there …”

We found a couple of things that needed some attention, but nothing beyond what you would expect when dropping a new motor into a car. Now that the Mustang’s heart is beating it only has a few minor items left, an alignment, one more day of assembly and another day for cleanup, then the car will head out for the interior. I will want it back after the interior goes in so I can drive it for a couple of days to make sure everything is up to the high JMC AutoworX and Murphy Rod & Custom standards … no leaks, squeaks or rattles please.

Then the only thing left … dropping the keys into Karl’s hand.

Late last week, before I was out of the office, I shot a couple of photographs of the Mustang after it returned from being fitted with the exhaust. I also took couple of snaps of the car fitted with it’s new wheels and tires.

It bothered me that in those pictures the car had the front fenders missing. The fenders were removed to facilitate the installation of the headers and I hadn’t yet re-installed them when I took the pictures.

Even though I was covered up with work after being gone a couple of days, I found the time to remount the fenders to the car. Partially to get them off the floor and back on the car where they would be safe, but also so I could grab a quick photo so it would quit bothering me.