A little of this and a little of that. These are photos and entries that don’t fit anywhere else. 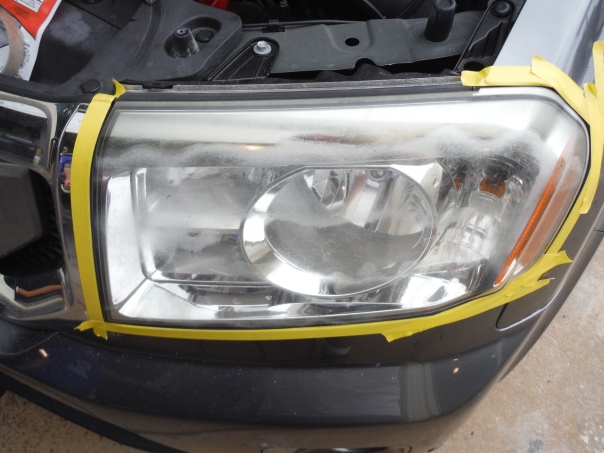 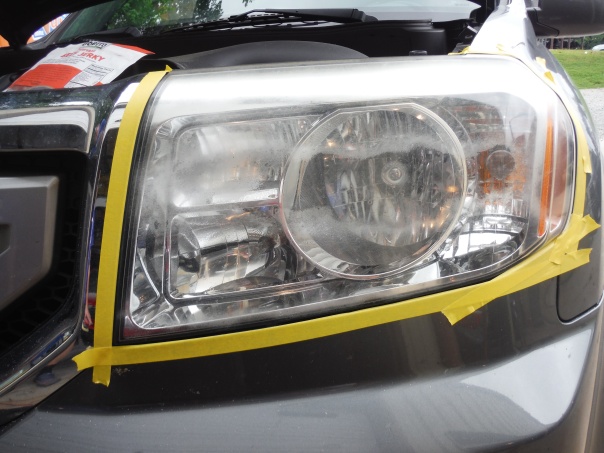 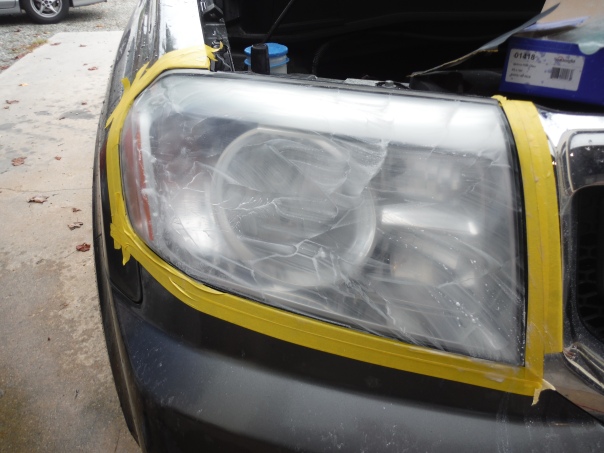 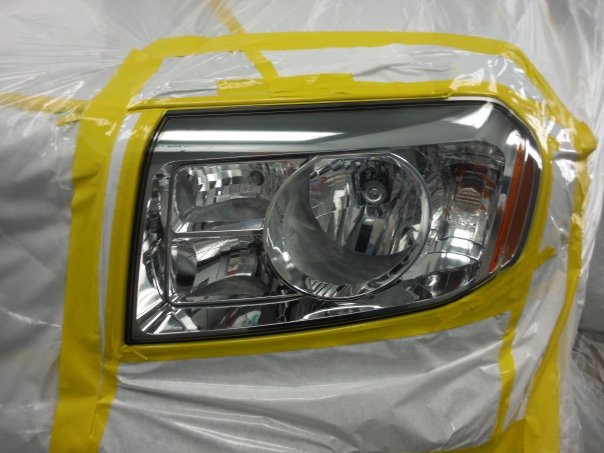 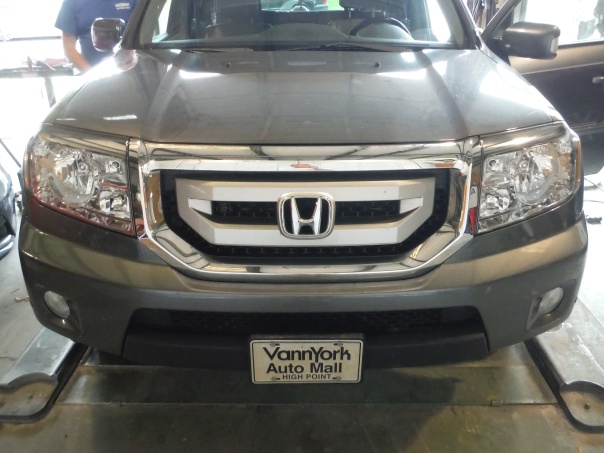 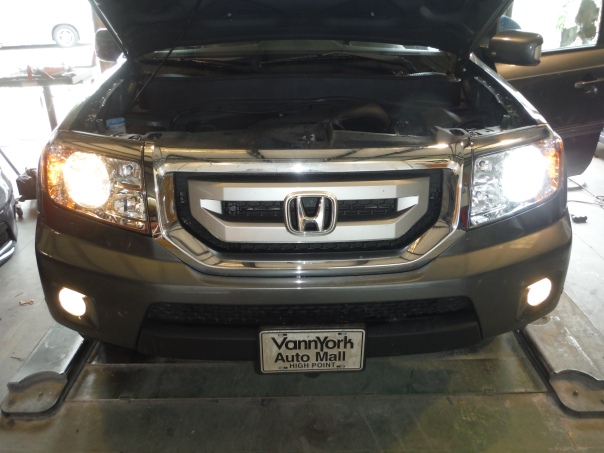 This Honda Pilot is in the shop to get the headlights restored. As you can see in the first picture, the lights were looking pretty bad.  Not only does this look bad, but it also limits the amount of light that hits the road. Its caused from the sun’s UV rays. Its actually rotting the plastic lens. What we do is sand all of the decay off and try to get it down to good clean plastic again. You can see this in the 3rd picture. The 4th and 5th picture shows the finished results. The last image shows the new LED bulbs we installed for the owner. The LED’s are on the right (as on your screen) the left is the factory bulb. Quite a bit of difference. This combination should help her see better at night. 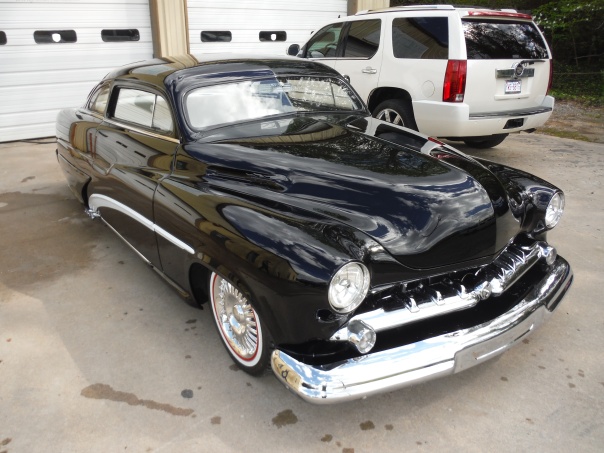 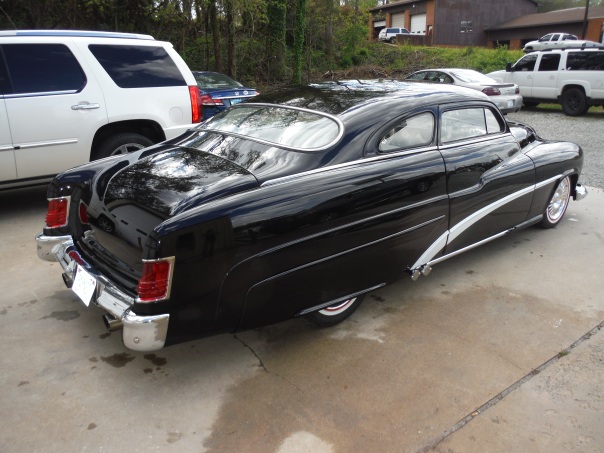 We had the joy this week of working on this blast from the past. Its a ’51 Mercury, chopped and lowered with over 500 cubic inches of old school power. A few paint touch ups here and there and this beauty was back on the road. What a great looking car.

Another one bites the dust 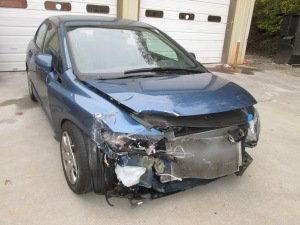 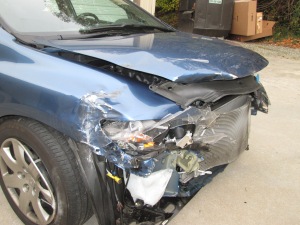 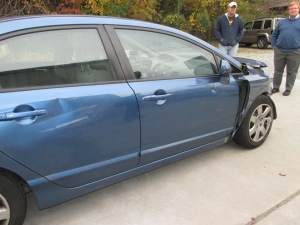 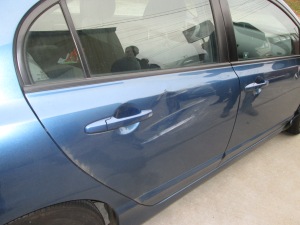 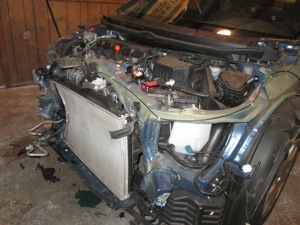 Sometimes, no matter how careful you are, things just happen.

Two years ago, give or take, the owner of this Honda brought his then three year old Hyundai to me. The owner turned left on a protected green when another drive blew through the light an hit him just about the right front wheel. The car was a complete mess and a total write-off.

The owner replaced that car with this 2010 Civic. Last week he bought this car to me, once again the victim of a car that failed to yield. This time the other driver didn’t blow a stop light, it was a stop sign, but once again the result is the same. A hard collision at the right front. I find it darkly humorous that the car was hit so hard that it nearly knocked the right front hubcap off.

The Honda took it a little better than the Hyundai did. The Hyundai was so badly damaged it couldn’t move under it’s own power, where the Honda can, but the end result is the same. The Honda, like the Hyundai before it, is a total write-off.

In the last picture we were digging around in the car to ascertain the extent of the damage. The car looks bad, but once you get inside, it gets even worse.

I really feel bad for the owner. Two write-off’s of two nearly new cars in two years … neither of which was his fault. I think owner deserves a prize for being the hardest luck driver I know. 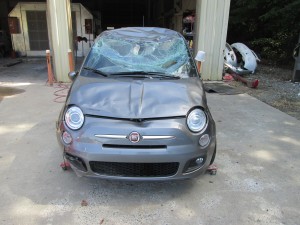 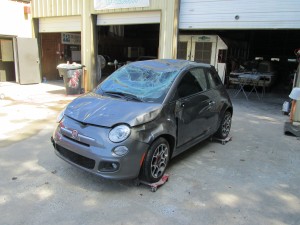 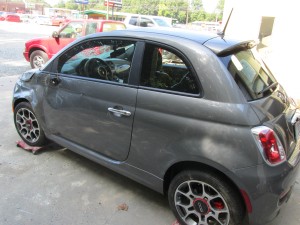 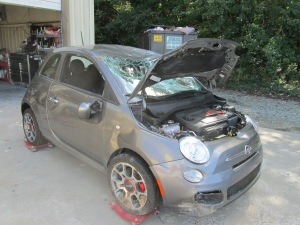 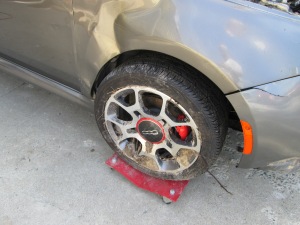 You can’t save them all. Take this nearly new Fiat 500. The owner ran off the road into a ditch, augured the nose in, and flipped the car end over end, landing on it’s roof. The air bags didn’t deploy and the owner walked away with just a few bruises. I’m very glad the owner wasn’t injured. A car can be replaced but a life cannot.

This car has actually been sitting at the shop for a while. It didn’t take much looking at the car to realize that the car was probably totaled. Before I crawled out onto that limb and declared the car totaled, I wanted  to wait for the official word from the insurance adjuster. It would be embarrassing to write that the car was totaled only to find out later we were going to fix it.

Well, we know now because a roll-back showed up this week and hauled it away. It’s too bad too. It’s a cute little car and I would have liked to have fixed it. The problem was that the only undamaged panels on the car were the rear hatch and rear bumper. Every other body panel would have to be replaced. Compounding the problem was the fact the car landed upside down and all the oil drained out of the engine. If the engine were still running while it were upside down … you could write that off as well.

It’s always a shame to see such a nice car totaled but it is what it is. It’s probably best for the owner that it was totaled … but I relish a good challenge, and this would have been one.

FIAT actually stands for Fabbrica Italiana Automobili do Torino, or in English, Italian Automotive factory of Turin. But in this case I think it stands for, Figured … It Actually Totaled.

Mr. Lincoln … your car is ready 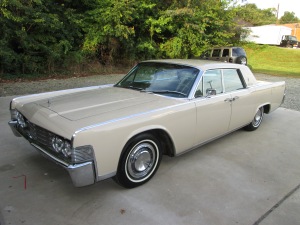 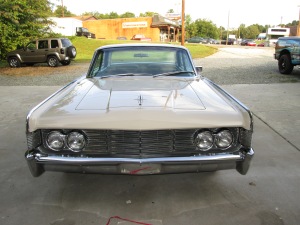 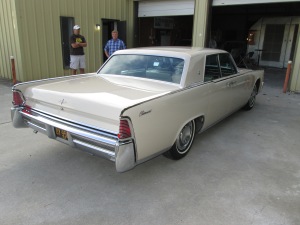 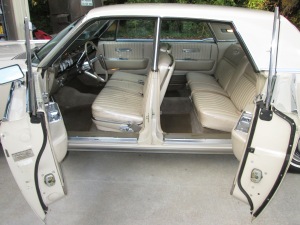 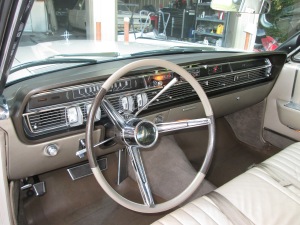 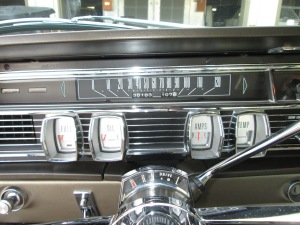 The owner of the El Camino stopped by the shop this morning … and look what he showed up in! This is an unmolested, all original, 1965 Lincoln Continental.

This car features the original drive-train, paint, chrome, glass and interior. Everything on the car is in perfect working order, right down to the clock. And to top it all off, it only has 30,000 miles on the odometer. Not 130,000 miles, 30,000.

Every car you have seen featured on this site has passed through the shop at one time or another … until now. And to be honest, I hope this one never does. That would be … a shame. 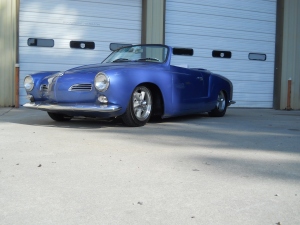 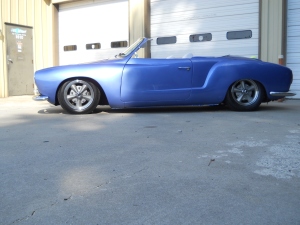 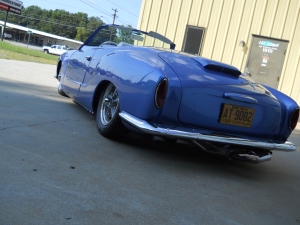 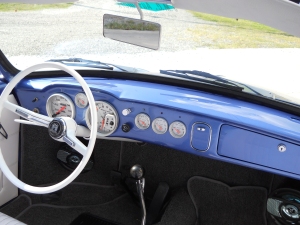 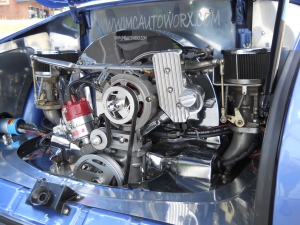 After the weeks and weeks of just brutal heat this summer, the weather has taken a turn to the pleasant. Don’t get me wrong, it is still plenty warm, but 88° beats 98° every time.

This is the 1960 Volkswagen Karmann Ghia convertible that I use to promote my business. I have completely reworked the car, bringing a real rust bucket back to the car you see here. The car is painted Suzuki Miami Blue with a white interior, a color scheme picked out by my lovely wife I might add.

The car has been dropped 5-inches, and because of that, I had to narrow the front beam 2-inches so the tires wouldn’t rub. Out back there is a dressed out 2096 cc horizontally opposed four cylinder with all forged internals, breathing through dual 44 mm Weber carbs. This setup makes about 140 horsepower, up slightly from the 1200 cc, 36 horsepower engine the car had when new.

I think it goes without saying the car has a bit more punch that it had back in ’60, so front disc brakes have been added so I don’t kill myself in it.

Taking the Ghia for a spin

This is a short video of me out enjoying the JMC AutoworX Karmann Ghia. The JMC AutoworX Karmann Ghia is a 1960 Volkswagen Karmann Ghia convertible that I rebuilt as a promotional tool for my business. I take the car around to car shows and the like as an attention grabber so that potential customers will walk up, look the car over, and if I’m lucky, take a business card. The marketing aspect is very low key, but this little car gets a lot of comment and smiles, and that makes it all worth while even if the people don’t take a card.

But this isn’t your typical Karmann Ghia. Built in 1960 the car had less than 40 horsepower when new. It does a little better than that now. The 78.8mm stroke Scat crank and 92mm pistons allows the engine to displace a healthy 2.1 liters. Scat pro drag wedge port heads with 44mm intake and 37.5 mm exhaust valves breathing through twin 44mm Weber carbs and all forged internals means this car makes big power … day in and day out. A fully built transmission with steel shift forks and welded 3rd and 4th gears allows the power to get to the ground without constantly having to stop and pick up pieces of the transmission.

It is a shame, I know, to have to drive this as the company car.