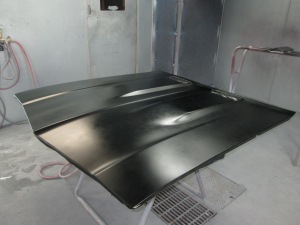 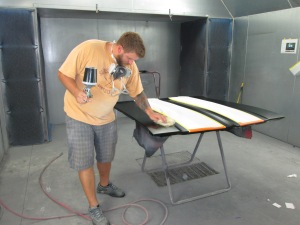 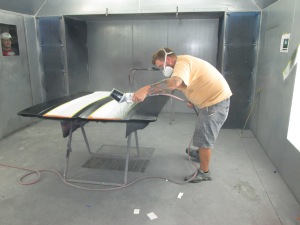 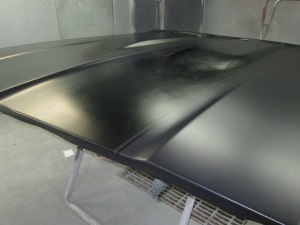 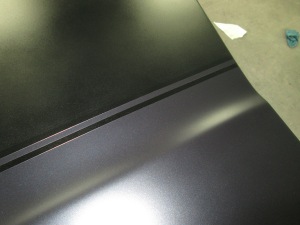 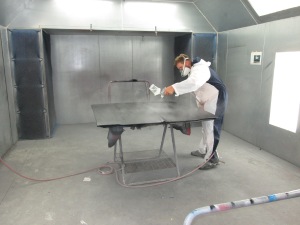 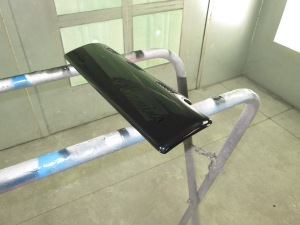 Today was all El Camino all day. I wanted to get the hood painted today, and we made it, but whoof, what a long day.

The first picture shows the hood in the booth with the underside masked off, to protect it from overspray, ready to paint.

In the second photo you can see a fuel rail cover. If you recall, back during the first part of April, Murphy Rod & Custom modified a pair of fuel rail covers from a Corvette to fit the engine going into the El Camino and we painted them gray so the owner could check his color selection. On the first of June we painted one fuel rail cover in a new color so he could compare his new color to his old. He must have liked the new color, Blackberry Pearl, better because that it is the color he has chosen for his car. Since we were painting anyway, the owner delivered the other fuel rail cover, the one that was still gray, so we could paint it in the new color.

Pictures three and four show the hood and fuel rail cover after being covered with the sealer. Sealer goes on under the paint and is designed to seal all the layer below it and provide a consistent color to aid in paint matching. The sealer is available in seven shades of gray, from nearly white to near black. Each paint color specifies one of these seven shades of sealer as the companion for each color. This is the darkest of the seven shades of sealer.

Photographs five and six show the hood and cover painted black. The black is the color of the stripes on the hood and the el Camino that is stenciled onto the fuel rail cover. We will mask off the areas that are to remain black and paint the rest of the hood and fuel rail cover in the Blackberry Pearl.

The next four photographs, numbers 7, 8 9 & 10, show Chris and I making off the areas of the hood that are to remain black. Masking off stripes on a hood isn’t hard work, but it is fussy  and confusing work. If you look at the wall in picture eight you an see a square piece of paper stuck to the wall. That is a picture of a car the owner provided that had stripes like he wanted on the hood of the El Camino. With it taped up on the wall as a reference, Chris and I spent a couple of hours laying tape and discussing what color goes where, and did we have the stripes in the right place.

The tricky part of laying stripes is to make sure they are dead straight. In picture seven you can see Chris carefully measuring to make sure the stripes were straight. Once one piece of tape is down straight, the rest are easy because they are all placed in relation to the first tape.

After the tape is down, laying out the edges of the stripes, the center is masked off. You can see that underway in picture ten.

After the areas of the hood that are to remain black are masked, the only thing left was to spray on the primary color and shoot the clear. You can see Chase tacking the hood in picture 11.

Tacking is the process of removing contaminates before painting. After all the moving around and touching the hood while we masked, the paint has to be cleaned again to make sure that the paint that is to be painted again is perfectly clean. Tacking uses a lint free cloth coated with a chemical to make it slightly sticky, about as stick as a post-it note. Wiping the tack cloth over the surface of the paint causes any dust, lint or hair to stick to the cloth and be removed from the surface to be painted.

After tacking everything perfectly clean, Chase lays down the primary color, the gorgeous Blackberry Pearl, in picture 12. Blackberry Pearl looks nearly black in person, though when the light hits it just so, the blue in the paint comes out.

Photographs 13, 14 & 15, show the difference between the Blackberry Pearl that looks black until you see it next to a true black. In these pictures only the base coat, the color, has been applied so the difference in color is more pronounced than it will be after the clear coat goes on.

In picture 16 Chase is suited up and ready to put on the clear coat. He is tacking the paint, as he has between ever coat of paint, to make sure no trash gets into the paint.

In picture 17 Chase is applying the clear coat. Like the base coat, the clear coat is applied in several layers ensure adequate thickness and coverage while at the same time avoiding runs. Because this a High Performance Finish car it will receive three coats of clear instead of the customary two. The extra clear is applied because we are going to remove some of the clear coat by wet sanding to ensure the maximum gloss and sharpest reflections, and I want to make sure there is enough clear coat on the car that we don’t sand though. Sanding though the clear would … ruin my day.

Pictures 18-22 show the results of all the sanding and priming and sanding … and finally, painting. Looks pretty good doesn’t it? But as good as it looks now, we still have to sand and buff the paint to bring the gloss up to an even higher level and ensure the reflection in the paint are razor sharp.

Check out the video to see 6 hours work, captured into one hour of video, edited down to just over four minutes of the good stuff.

Yesterday evening I stopped by Murphy Rod & Custom to watch as Kelly started the Mustang for the first time. The owners, Cassie and Karl, were on hand for the big moment.

Last week Kelly got the car far enough along so that we knew when Cassie and Karl, who had asked to be there for the big event, were present it would start. It didn’t disappoint. A turn of the ignition and it burbled to life. Kind of anticlimactic actually, though Karl was jazzed. I cut the bit out because I was jiggling the camera, but you could hear Karl in the background exclaiming, “That’s what I’m talking about right there …”

We found a couple of things that needed some attention, but nothing beyond what you would expect when dropping a new motor into a car. Now that the Mustang’s heart is beating it only has a few minor items left, an alignment, one more day of assembly and another day for cleanup, then the car will head out for the interior. I will want it back after the interior goes in so I can drive it for a couple of days to make sure everything is up to the high JMC AutoworX and Murphy Rod & Custom standards … no leaks, squeaks or rattles please.

Then the only thing left … dropping the keys into Karl’s hand.

Taking the Ghia for a spin

This is a short video of me out enjoying the JMC AutoworX Karmann Ghia. The JMC AutoworX Karmann Ghia is a 1960 Volkswagen Karmann Ghia convertible that I rebuilt as a promotional tool for my business. I take the car around to car shows and the like as an attention grabber so that potential customers will walk up, look the car over, and if I’m lucky, take a business card. The marketing aspect is very low key, but this little car gets a lot of comment and smiles, and that makes it all worth while even if the people don’t take a card.

But this isn’t your typical Karmann Ghia. Built in 1960 the car had less than 40 horsepower when new. It does a little better than that now. The 78.8mm stroke Scat crank and 92mm pistons allows the engine to displace a healthy 2.1 liters. Scat pro drag wedge port heads with 44mm intake and 37.5 mm exhaust valves breathing through twin 44mm Weber carbs and all forged internals means this car makes big power … day in and day out. A fully built transmission with steel shift forks and welded 3rd and 4th gears allows the power to get to the ground without constantly having to stop and pick up pieces of the transmission.

It is a shame, I know, to have to drive this as the company car.